Residents in the Baton Rouge Metro area currently enjoy the distinction of living in one of the few cities in America to have perfectly soft water. That first well in 1889 was the beginning of this local luxury.

The earliest record of the local water supply is dated November 8, 1887, when an ordinance was adopted by the then Common Council making a contract with E. Smedley and John H. Wood of Dubuque, Iowa, authorizing them to "construct, build, maintain, operate and own a system of water in the city of Baton Rouge and to supply the said city and its inhabitants with water." The contract also provided that the water works have a capacity to furnish 2 million gallons of water in 24 hours and that the standpipe be constructed to hold 100,000 gallons.

In April 1910, the company changed hands and became the Baton Rouge Water Works Company. Mr. C.C. Bird served as president from offices then located on Natchez Street (now Front Street). Meters in those days were read by men who travelled from house to house in horse-drawn buggies. Bills were prepared each night and hand-delivered the next day. As local demand grew, so did the company, moving it's office location in 1920 to 131 Lafayette Street, again in 1961 to 4615 Government Street, and finally, in 1985, to it's present location at 8755 Goodwood Boulevard.

Water for Baton Rouge is obtained from sixty-six deep wells ranging in depth from 600 to 2,800 feet. The water supply probably enters the ground in the area near Vicksburg, Mississippi, moves through sand strata, and eventually reaches Baton Rouge where it is drawn off by wells, emerging from the ground bacteriologically pure. It is chlorinated and then pumped to distribution lines amassing over 1,550 miles in length.

Because of this superior supply and distribution system, Baton Rougeans enjoy one of the lowest fire insurance rates in the nation. 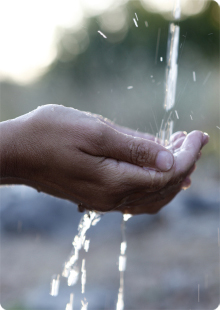 Water early in the morning for the most benefit to your lawn.